Situated just outside Achalgarh Fort, about 11 kilometers from Mount Abu, Achaleshwar Mahadev Temple is one of the most popular temples in Mount Abu. It is a temple that is almost 2500 years old and also, the only place in the world where the toe of the great Lord Shiva is worshipped. Some also believe, that this is the center of Earth. 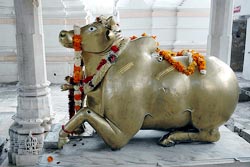 Legend has it that this temple was built to evade the Muslim rulers. It is believed that the kings at that time camouflaged the temple to protect its holiness from the invaders. Due to which, this entire area was covered under a layer of sea green foliage or lime, thus hiding this fine masterpiece built by the great artisans of that era. However, during this operation, the laborers who helped in covering the temple also got lost with the lime and the future generation ultimately forgot about it. This is until during 1979, when Yuvraj of Sirohi State discovered the temple while taking his royal visitors for a tour.

He ordered his artisans to restore the temple to its initial glorious state using extreme precaution and care. Slowly, the pristine marble temple under the layer of lime was recovered and the beautiful poems and writings were read with fervent respect. As the temple was being restored, utmost caution was taken so as to prevent any further destruction to the temple. Each pillar and column was refurbished and repaired with extreme care, which could be clearly seen at the Nandi corral.

It was discovered that the sanctorum was not built with slabs of marbles or bricks; instead it was constructed using large blocks of marbles. A gallery meant for walking around the temple called the ‘Parikrama’ was also found while cleaning the temple. Moreover, several skillfully sculptured statues of Chamunda, covered in vermillion, were also found.

A life size idol Nandi Bull, which is believed to the primary carrier of Lord Shiva, sits outside the Achaleshwar Mahadev Temple. It is made using five different metals, namely, silver, gold, zinc, copper and brass and weighs around 4 tonnes. Built in 1412 AD, the temple was constructed in a typical Jain architecture style of design. One of the most interesting features about the temple is a deep hole or a pit, representing the toe print of Lord Shiva, which is believed to reach the netherworld. Achaleshwar Mahadev Temple is also home to a natural Shivalinga. 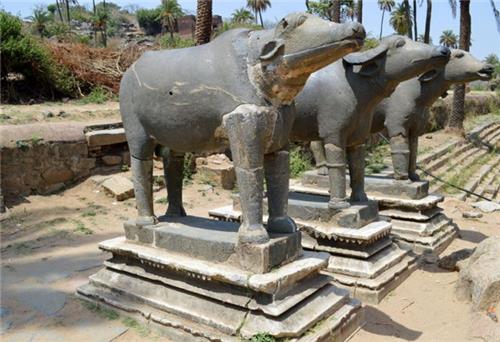 Near the temple, one can also visit the three beautifully sculptured stone buffaloes, located next to Mandakini Lake. It is believed that during the pre-historic days, this lake was filled with ghee and these statues represent the demons, disguised as buffaloes, who used this lake as their watering hole, until they were killed by Raja Adi Pal.

Besides these statues, there are also many other sculpted idols over here that are made out of a crystal resembling a stone. During bright days, the stone becomes almost opaque, however, if you put a candle behind the idols, a magnificent crystal-like sparkle can be seen. This stone is known as Sfatik or the crystal stone.

The best time to visit Achaleshwar Mahadev Temple is between the months of October and March, when the weather is quite pleasant.

How to Reach Achaleshwar Mahadev Temple

Since the temple is located very close to Achalgarh Fort, one can easily hire a taxi or catch a bus from Mount Abu to reach Achaleshwar Mahadev Temple.