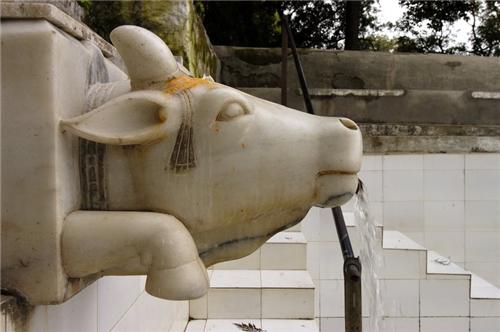 The Gaumukh Temple is the most sacred spot of Mount Abu. The temple is situated among the wild greenery, covered with thick forest and visiting the place after dark is not recommended. The place is pretty remote from decent habitation and people generally enjoy a walking excursion to the temple. The Gaumukh temple is dedicated to Lord Vashishth, who was mythically believed to be the creator of the four main Rajput clans. As per ancient myths, Mount Abu was a part of “Arbudaanchal” with sage Vashishth residing the place along with his wife and the mythological wish fulfilling cow, Nandini.

It is popularly believed that Saint Vashishth performed a sacred “Yagna” (fire ritual) to create four Rajput clans of fire, named as Agnikula. This Yagna was performed beside a natural spring, which came out of a rock with the shape of cow’s head. This spring is believed to be the origin of the three most sacred Indian rivers, the Saraswati, the Ganga (or Ganges) and the Jamuna. The powerful sage is popularly rumoured in the local mythology to have brought Nandi Vardhan Mountain, the youngest son of Himalaya to Mount Abu with the help of mighty snake, Arbud. Later as time passed, Mountain Arbud became Mount Abu during the British era.

Legend has it that while the creation of the four Agnikula Rajput clans took place from the Yagna, violent tremors occurred leading to the formation of the highest peak of the region, Guru Shikhar. Thus Lord Vashishth is considered as the creator of this hill station and so his temple is worshipped with great respect. Every year, hundreds of devotees visit this temple from localities and outside. A large marble statue of a cow head is present at the temple complex and a stream of holy water flows out of its mouth. The temple is made up of old stone with lovely carvings on its walls and doors. It has marble statues of Saint Vashishth, Lord Ram and Lord Krishna. Nearby, there is a Hanuman temple, from where one has to take a flight of 700 stairs among the green forest to reach this holy temple.

Other than the temple complex, Gaumukh as a place is perfect for nature lovers. One can stand at the hill top and see the underlying green valley. From hotel tourists are advised to take the road leading to Abu Road Railway Station. After reaching Hotel Aravalli on Abu road, the first right turn leads to the Gaumukh road. The end of the road is where the Hanuman Temple stands. Cabs, jeeps and private cars are available to reach the destination.