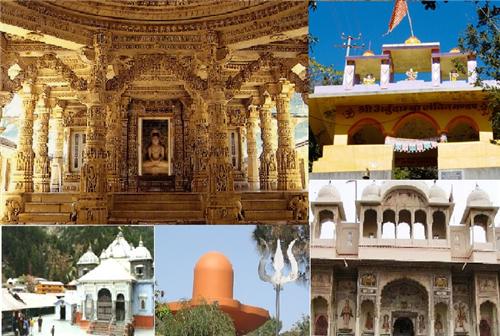 Mount Abu is one of the top religious destinations in India, with respect to Hinduism. Also known as the Abode of the Gods, it is believed that all the thousands of Gods in the Hindu mythology have touched upon this holy mountain at least once. Due to the sanctity of this place, few other sects and religions have also left their marks on this place. Mount Abu was also a renowned centre for Vaishnava and Shaivite pilgrimage in the 11th century.

Mount Abu has been placed in the global fame due to the brilliant Dilwara Temple that marks the epitome of glory of the Jainism religion. The astonishing structure of Dilwara Temple was carved out of marble sometime in between the 11th and the 13th century. Getting a chance to visit this magnanimous structure is a delight experience of a lifetime.

Historically speaking, the temple with the oldest recorded history is the Vimal Vasahi Temple, which was built by Vimal Shah in 1031 A.D. He was a Minister in the Solanki Empire of Gujarat. The temple is dedicated to Adinath, who was the first of the Jain Tirthankaras. In Jainism, a Tirtha?kar is a human being who helps in achieving liberation and enlightenment. This outstanding Jain architecture is also carved out of marbel procured from the renowned Arasoori Hill, near Ambaji, 23 km from Abu Road.

The Mount Abu also is the home of many other famous and historically important temples and religious destination. Some of them are as follows: