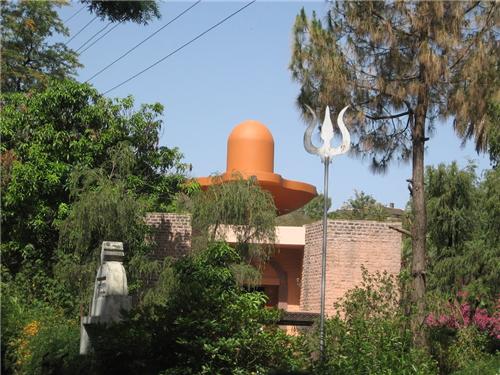 Shankar Math is a new math, which has gained importance in the land of ancient temples and caves of Mount Abu. Shree Paramahamsa Parivrajakacharya Mahamandaleshwar Swami Maheshanand Giri Ji Maharaj was the founder of this math in 1960 - 62, although during that time this place had not been declared as a proper math. During his early pilgrimage days he visited this hill station and performed religious severity and penance in a cave near the Nakki lake. While residing here, his fondness for the place grew with time and he chose the Aravali forests as his home, but not too far away from the civilization. This house was infamously termed as the “Bhoot Bangla” (haunted house) which with time was renamed as the Shri Shankara Math. As time passed by more monks started living the place making it holy destination.

The Shankar Math priests took vocational classes to small local children on the slokas of Vedanta. Only after 1965, this math was properly built for permanent settlement of the holy monks. This eco-friendly math is made up of red stone and is dedicated to Lord Shiva. The main temple or “Shivalaya” began in the year 1975 and got completed in 1977. The top of the temple from outside bore the shape of “Shiva Linga”, which is honoured with rain water during Monsoon. Legends say that Devaraja Indra himself pours water on this Shivalinga. In 1986-87 the Math got its first lodging house, for the residential saints who had left their family in search of moksha (salvation).

The math does vocational courses on Vedanta literature for the common people from time to time. Many devotional camps occur today, attended by thousands of devotees every year. Swami Giriji Maharaj started the first devotional camp named as “Sadhansaptah” in 1972 which continued for a year till 1982 due to its tremendous success. Every year “Sadhanashivara” the camp for the youth association “Yuva Mandal” takes place. The founder swamiji died in 2008, but his legacy for a better society is still carried on under the guidance of Swami Punyanand Giriji Maharaj Mahamandaleshwar. This Math is also taking care of the poor by offering them free meal every day and clothes for every season. It is from here that “Shankar Jayanti” is being celebrated in Mount Abu every year.