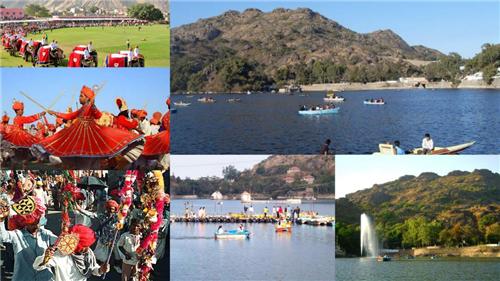 Mount Abu has been witness a long history of Hindu dominance, dotted with mythology and legends. The belief of the local people on their age old traditions is marked with the celebrations of various festivals and cultural events throughout the year. The tourism department of Rajasthan has also started recognizing few of the most important festivals. They have started promoting them to bolster the tourism industry. Every year, during the month of May or June, on the auspicious full-moon day of Buddh Poornima, the Summer Festival is celebrated. This festival is aimed to celebrate the affection and exuberance of the local population and in the process welcome the tourists into their culture. This is a unique experience, which leaves an everlasting impression regarding the location, culture and warmth of the populace.

The festival is initiated on the first day with a traditional procession emerging from the RTDC (Rajasthan Tourism Development Corporation’s) Hotel Shikhar and at the Nakki Lake Chowk. Folk act and presentations from Rajasthan and neighboring state of Gujarat dot the celebrations. This is a three day long celebration jointly organized by RTDC, Mount Abu’s Municipal Board and the District Administration. The festival reaches its pinnacle of excitement on the second and the third day. Through these days, various competitions are organized. The people are drawn to the Skaters’ Show, Skate Race, Horse Race, Panihari Matka Race, Tug of War, Deepdan and various other competitions.

However, the race competition that takes the crown in terms of popularity is the Boat Race on the exotic Nakki Lake. The excitement of the nail biting finish of this race is a moment to cherish with baited breath. The live band performance by the CRPF (India’s Central Reserve Police Force) is another program having its own grandeur and fame. During the evenings, tourists also get the choice of attending the Shaam-e-Qawwali musical performance to add on to the charm of bygone era of princely exuberance. On the third day, the pompous festival is brought to a closure with a magnanimous display of fireworks in the evening.

Since the Buddh Poornima dates depend on the Indian traditional calendar, it varies with respect to the western calendar and also tends to fall on varying dates across different years. So it is advisable to check the relevant program dates for the year, in case you are planning to visit Mount Abu during this festival time.